There are also a number of arrhythmias that are not caused by a heart condition and are therefore known as “idiopathic”. GECA is a non-profit organisation that opens its doors to everyone – but especially youngsters – with this type of arrhythmia, but focuses its attention, for historical reasons, on Arrhythmogenic Right Ventricular Cardiomyopathy, given the high frequency of this disease in young people.

Q: What causes the disease?

A: It has become clear that it is a GENETIC disease, and therefore FAMILIAL, except those cases in which the affected subject presents an ex novo mutation (i.e. one not present in either of the parents). To date 11 DISEASE-CAUSING GENES have been identified. In most cases, the condition is passed on by AUTOSOMAL DOMINANT transmission, meaning that if one of the two parents is a carrier of the disease, each of their offspring has a 50% probability of inheriting the disease-causing gene mutation. Inheriting the mutation does not automatically mean the individual has the disease, but rather he/she is at risk of developing it. This depends on the degree of gene penetrance in subjects with the mutation: if penetrance is high, the subject has a high probability of becoming sick, if it is low, the disease may never develop (healthy carrier of the disease). Consequently, whereas for some patients the presence of other cases of the disease in their family is evident, for others it is not. This is due to the fact that in many cases few family members have a medical examination, as they may have lost contact with other branches of the family.

A: In a number of cases, the disease is not manifest and the cardiac tests are negative. However, it should be taken into account that the clinical signs of arrhythmogenic right ventricular cardiomyopathy usually appear during adolescence or early adulthood (15-25 years) and it is therefore rare to find individuals who are sick at a young age, so regular tests should be conducted to assess the onset of the disease over time.

Q: Why do the arrhythmias and heart changes appear?

A: The heart is usually composed of cells arranged in an orderly manner and joined to one another by junctions, known as intracellular junctions. In patients with arrhythmogenic right ventricular cardiomyopathy, the genetic mutation induces the production of defective cardiac proteins that in the long-term cause damage to the heart cells and, ultimately, their destruction. However, this process does NOT usually regard all the heart cells, rather it takes on a leopard spot-like distribution and as a result, areas in which the cells have been replaced by fibrotic and adipose tissue can be surrounded by normal heart cells. The damage to the heart cells can lead, on the one hand, to dilation of the right ventricle (see figure) and, on the other, to the onset of arrhythmias, due precisely to the lack of homogeneity between the normal cells and the replacement cells.

FIGURE 2: heart of a subject with a form of arrhythmogenic right ventricular cardiomyopathy. If we compare this to the previous figure, we can see that the right ventricle is dilated. Another characteristic of the disease is the presence of abnormalities in the contraction of this ventricle. Key: LA: left atrium; LV: left ventricle; RA: right atrium; RV: right ventricle.

Q: Why do disease-causing gene mutations cause this disease?

A: Three of the genes identified so far encode for three proteins, called Plakophilin, Desmoplakin and Plakoglobin, that are found in the intercellular junctions. In the presence of mutations, these proteins are “defective” and can cause the rupture of the junctions and therefore damage to the heart cell. A fourth gene, called TGFbeta 3, would appear to be responsible for increased fibrosis. Lastly, mutations of the RyR2 gene cause an increase in intracellular calcium during exercise, which damages the heart cell and simultaneously makes it electrically unstable.

Q: As the mutated proteins are present in the cells of the whole heart, why does the disease primarily affect the right ventricle?

A: It would appear that the reason for this is the different thicknesses of the two ventricles. As a matter of fact, the right ventricle is thinner than the left and as the damage would seem to progress from the outer (epicardial) layers of the heart muscle to the inner (endocardial) ones; even modest damage causes the destruction of a particularly high number of heart cells able to result in the clinical setting of the disease.

Q: What are the symptoms of arrhythmogenic right ventricular cardiomyopathy?

The main symptoms are:

NB: THE IMPORTANCE AND THE SEVERITY OF THE SYMPTOMS VARIES GREATLY FROM ONE SUBJECT TO ANOTHER AND EACH PATIENT THEREFORE REQUIRES INDIVIDUAL ASSESSMENT.

Q: Which tests are to be performed in order to be able to diagnose arrhythmogenic right ventricular cardiomyopathy?

A: Diagnosis is posed using the following protocol:

It is necessary to reconstruct the clinical history of the family. Are there any family members, including those belonging to one or two previous generations, who have or have had arrhythmias? Do/did any faint often? Have any ever had a syncope? Did any die at a young age?

This exam analyses the transmission of the heart’s electrical signal and it is performed by positioning electrodes on the subject’s chest and limbs. In individuals with arrhythmogenic right ventricular cardiomyopathy, the ECG may show signal abnormalities that reflect the changes in the heart muscle. However, in some patients the ECG can be normal or present minor abnormalities.

This is a special electrocardiogram that examines the heart’s electric signal and analyses the presence of a non-homogeneity in electrical conduction, which once again may be due to changes in the heart muscle.

This examination consists in a continuous recording of the heartbeat lasting 24 hours, making it possible to record and quantify the presence of any heart arrhythmias.

This test analyses the ECG and blood pressure during exercise. It is usually performed using an exercise bike or treadmill. In arrhythmogenic right ventricular cardiomyopathy, the main purpose of this test is to analyse how arrhythmias behave under exertion (do the arrhythmias disappear with exertion? are the arrhythmias caused by the exertion?).

This exam uses ultrasound to analyse the morphology of the heart, i.e. the size and movement of the chambers and heart valves.

This technique makes it possible to examine all the structures of the heart in detail. It is possible to make a distinction between the presence of fat and any fibrosis (in this case contrast medium is used).

This procedure requires a short stay in hospital and consists in introducing a catheter through the femoral artery and vein. The catheter is then inserted as far as the heart, where contrast medium is used to examine the arteries that supply blood to the heart, coronary arteries and ventricles. In addition, in certain cases, during the procedure it is possible to obtain a small BIOPSY of the heart muscle, which will subsequently be analysed under the microscope.

Like cardiac catheterisation, the electrophysiology study consists in introducing catheters into the heart cavities. This examination technique is used to perform a detailed analysis of the heart’s electrical activity, including with new cardiac electroanatomical mapping techniques (CARTO). In certain cases it is also possible to perform ablation.

Why is it important to perform a genetic study in families in which there are cases of arrhythmogenic right ventricular cardiomyopathy?

Once the disease-causing gene is identified in a family, it is possible to obtain a great deal of information that will help the clinical investigation. Firstly, it is possible to exclude from follow-up those subjects who do not have the mutation, to whom we can say “you are healthy”. Secondly, more frequent tests will be performed in subjects with the mutation, in order to identify any appearance or evolution.

What therapy is indicated in patients with arrhythmogenic right ventricular cardiomyopathy?

At the current time there is no therapy that acts on the aetiology (cause) of the disease; strenuous physical exercise would appear to play a role in favouring the evolution of the disease, making it contraindicated. There are a number of antiarrhythmic agents that are usually used to control arrhythmias and in those cases in which medicinal products are ineffective or particularly severe arrhythmias are present, the use of an implanted cardiac defibrillator (ICD) is indicated. 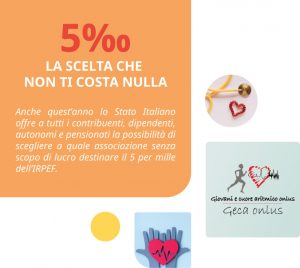